On Saturday I blogged and worked on the ENCIP website, then met up with my friend Jasen for lunch. Later I had a phone call with the co-chair of Slow Food NYC, going over the requirements for chapter board members. I'd applied to be on the board, but that conversation led me to understand that I don't actually have the schedule capacity to carry out all the required responsibilities.

After a quick stop at home, I took the train to Chelsea for my first night at Txikito, my newest employer. I shadowed the host, a server, and the expediter, getting a feel for how the restaurant operates. At the end of the night, I got to try pretty much all of the pintxos (little sandwich tapas) and a few of the other plates. Happily, the manager invited me back for additional training: Wednesday, Thursday, and Friday nights.

In the meanwhile, I had a move coming up. I spent Sunday morning walking around the neighborhood, visiting cafes that were closer to my initial (temporary) lodgings than my more permanent upcoming abode. I ate a delicious cinnamon bun at a local bakery, caught up on Pantsuit Politics, and walked probably two miles. Eventually I found myself at a little tea house on Flatbush, where I ended up meeting my friend Jaclyn, whom I'd met at Duke. Then I dropped off my backpack at home and headed out to the highlight of my weekend: Harry Potter trivia. The group I'd gotten together was a great mix: another friend from Duke along with his girlfriend, in addition to someone else from Duke whom I'd met at radio club and his girlfriend, plus that guy's friend from high school. I was impressed with my teammates' HP knowledge. Our team was aptly named the Fizzing Quizbees. We placed fifth.

Afterwards, a few of us grabbed dinner along with the high school friend's boyfriend. We ate at NY cabbies' favorite Indian/Pakistani restaurant. I hope never to be a NY cabbie, but I, too, was a fan of this Indian restaurant. Though I haven't met an Indian restaurant I didn't like...

I spent that evening re-packing my belongings. Being transitory can be wonderful, but after nine weeks of living out of suitcases, I'm ready to stay unpacked for awhile.

Monday was moving day! I got unnecessarily stressed, but everything turned out wonderful! I hired a guy from a nifty website called Task Rabbit, and the move took less than an hour. My new apartment is lovely. It's wondrous. I haven't gotten to know my roommates yet, but judging by their decor and books and bikes, I think we could be friends. 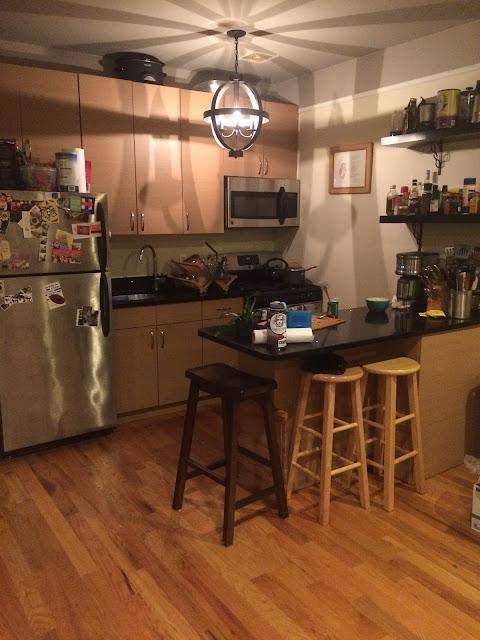 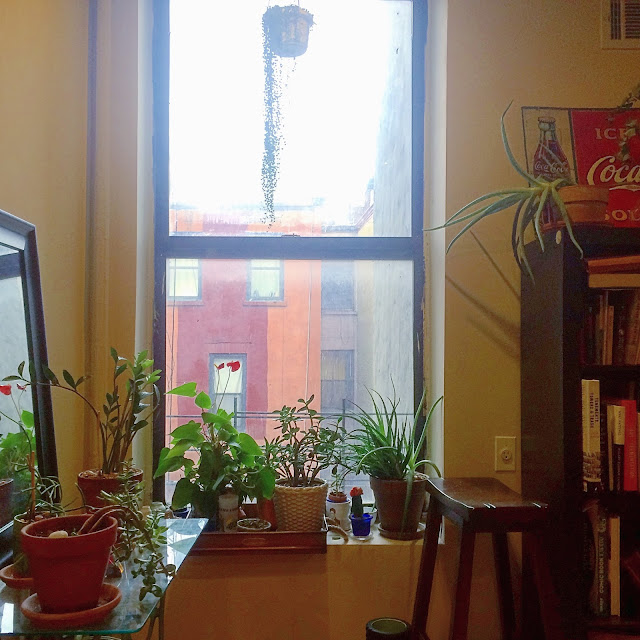 On Thursday morning I had a really wonderful conversation with an employee of The Dinner Party — someone who lives in Brooklyn and is setting me up as a co-host for a new table in Bed-Stuy. She was open and articulate and engaging and empathetic — someone I'd look forward to spending more time with. Again, that phrase from Elizabeth Strout: "the gift of endless encounters." Largely, that is what NYC has been for me thus far.

Today I hung things on the walls of my room. Amazing how flat, framed displays of line and color hanging from a nail can make me feel so at home. Tonight I'm going to someone's birthday party, another UNC alum. I don't know him well, but I can only assume that the party will be, for me, another of this city's gifts of endless encounters.
Posted by Caroline Leland at 5:12 PM