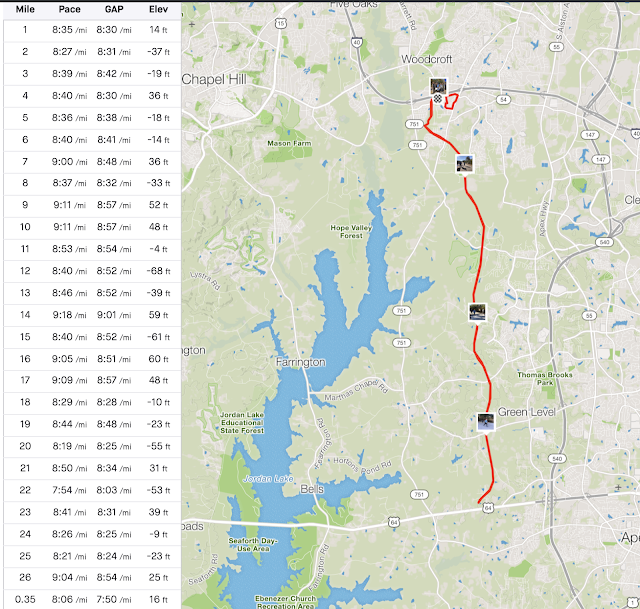 So, the race was fun. It was good! Nothing bad happened! which sounds like a low bar— but think about all the bad things that could happen in 3 hours and 49 minutes!

Yes, that was a not-so-subtle flex on my finish time. My time goal was very broad: I would've been happy with anything under 3:55. All my long runs were around 9:00/mile, but I read that long runs could be up to a minute and a half per mile slower than your race pace! So I had no idea what to expect, except that it would be somewhere between an 8:30 and a 9:00 pace (which is very broad).

My coach, Jim, told me to start at 8:55. I knew that wasn't going to happen. But I did listen to his instructions about pacing based on heart rate, and that's what I'm most proud of. This is the graph of my heart rate throughout the race:

See that long, slow, gradual increase? That's the discipline I worked toward throughout my training. That's why I love endurance sports. I'm not a fast sprinter, but when other people are starting out too fast and burning out too soon... I'm the slow and steady tortoise. I'm proud of that.

Oh, and the pain in my foot? I took a risk by running in brand new shoes (I put five miles on them before the race) and I had absolutely zero pain during and after the race. See? Nothing bad happened! And for that, I am grateful.
Posted by Caroline Leland at 4:37 PM No comments: Links to this post

Things that make me nervous: Every long run ended with pain in my right foot and sometimes in my left knee. At the end of my longest run (22.5 miles), my foot, both knees, and my hips all hurt pretty bad. But every time, I'd feel better by the second or third day afterwards, and it never got worse with consecutive runs.

Also, I realized a few days ago that the sole of my right shoe had worn down significantly on one side of the heel. Is that what caused the pain in my right foot? I broke a major rule of marathoning ("Nothing new on race day!") and decided to run in new shoes rather than risk potential injury from my old, worn-down shoes.

Things that make me excited: I did all my long training runs, building up slowly over the course of 16 weeks. I ran a "longest run yet" six times. By the time I started tapering, 15 miles felt relatively short—and definitely easy.

Tomorrow's weather is expected to be close to ideal: a little cold at the start (30 degrees!) but warming up close to 50 by the last hour of my run. According to Google, the ideal marathon racing temperature for women is 51.8 degrees. I'll gladly take too cold over too hot—though I might have been at an advantage in a hot race due to my not two, not three, but four months of HOT-weather training this summer and fall.

I'm not sure what to expect in terms of my own speed/pacing. Until I hit about 15 miles, my long runs were always around an 8:30 pace. Starting with the 15-miler, and for every long run following, my pace was closer to 9:00/mile, varying from 9:20 to 8:40 on average. But that was with breaks for water and stretching. What it's like running for more than a couple of hours without stopping, I couldn't tell you. But hopefully after tomorrow, I can :D

My mantras for the race:
This is what you came for.
I am strong, I am capable, I am enough.

A leader of my run club (shoutout to Fleet Feet Carrboro) sent out this essay today that resonated with me (even though the "you can't prepare enough to guarantee success" part terrifies and frustrates me). Some of my favorite lines are about how marathon training is antithetical to the modern "age of convenience." Below are some of my favorite lines from the essay (rearranged):

Why do we do this?

To feel something. To move ourselves, to ensure that we don’t get stuck.

The point is the inconvenience. The delay without the guarantee of gratification. It’s structuring your weeks, months and years around something beyond daily life.

Racing is testing — It’s submitting yourself to a task, unsure of the outcome, for the thrill of discovering the answer to the question,

“Can I handle this much for that long?"

Completion of a training block, regardless of errors or hiccups, is its own feat worth marveling for a moment. Many won’t make it to the start — having broken before the gun.

The weekend before Hanifah's wedding, my FAVORITE PERSON ALBAN came to visit me!!!!!!

She arrived on a Thursday, so while I was at work on Friday she hung out in my house and kept Rafi company. 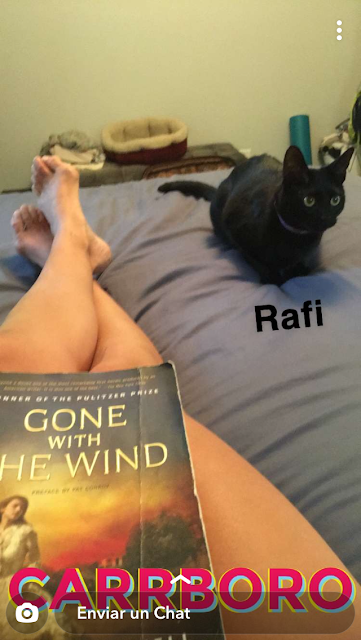 When I got home from work, they were both napping adorably in my bed together.

On Friday after I finished work, we drove to Lake Gaston!

And now for some bonus pics of my beautiful daily work breakfast:

Posted by Caroline Leland at 7:25 PM No comments: Links to this post


After I landed on Friday evening, Jim, Lisa, and I went to a newish popup restaurant in Nashville called Tailor. Back when I lived in Nashville, this chef and I were both on the board of Slow Food Middle Tennessee, so I was especially excited to check out his new foodie project.

The multicourse meal was served family-style: Servers brought out each course at the same time to all tables, and then the chef (Vivek Surti) would stand in the middle of the room and tell a story about how he developed the dish based on his rural Tennessee upbringing merged with the traditions of his Gujarati Indian family.

Every course was excellent, and it was fun learning about how so many of the ingredients I might consider traditionally Southern could also be considered traditionally Indian. Here are few of the most picturesque dishes:


On Saturday morning, I did a 12-mile run: from the Crowes' house in Hillsboro Village, to Shelby Bottoms Park, and back. Jim ran the (first) 2.7 miles to the river with me! After I got back and showered, the three of us went to my favorite Nashville bakery: Dozen.

Then the three of us went to a cafe in Berry Hill that Lisa likes (called District Coffee) and did some coworking for a few hours. Then it was time for Lisa and me to get ready for Hanifah and Daniel's wedding! We ended up being stuck in traffic for a solid half-hour on the way out to Montgomery Bell State Park, where the wedding was held, so we missed most of the cocktail hour prior to the ceremony. But I had just enough time to snap this pic of the beautiful reception lodge: 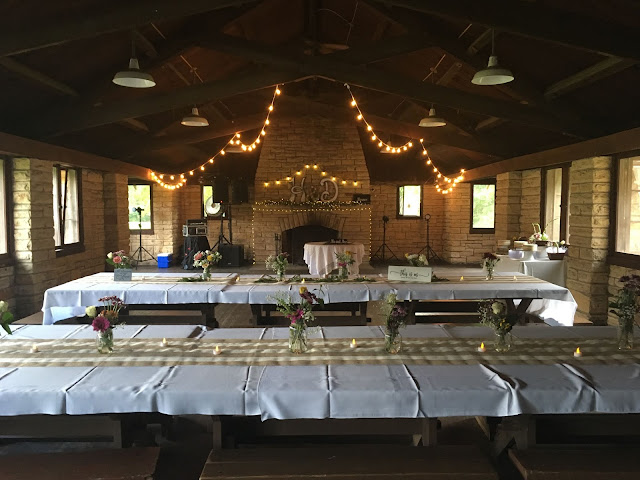 The ceremony was held under a giant oak tree in the middle of a clearing: 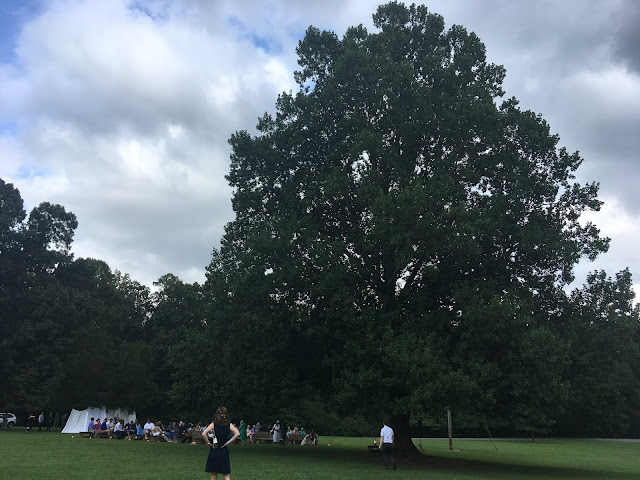 Afterwards, there was a buffet dinner followed by some DJ-ed dancing. Hanifah seemed really happy, and I was happy for her.

On Sunday morning, Lisa and Jim skipped church to hang with me!! The three of us went on a short run down Belmont Road and ran past my childhood home on Ashwood on our way back to their house on 21st Ave S.

Then we ate this AMAZING tomato tart that Lisa made: 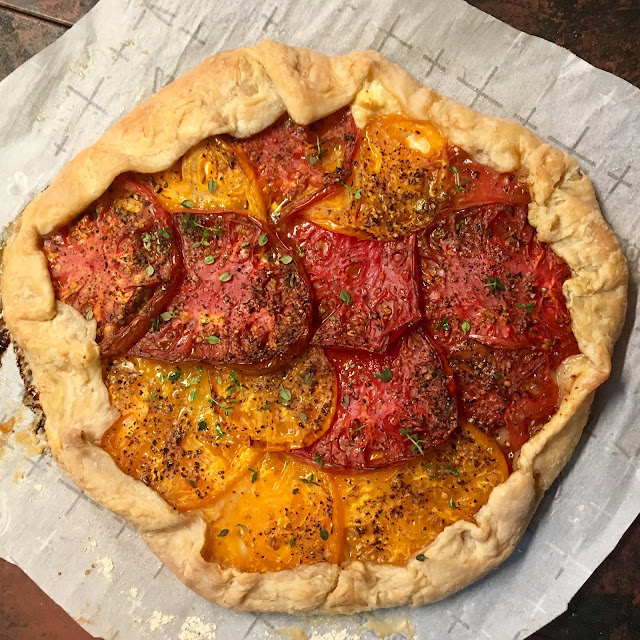 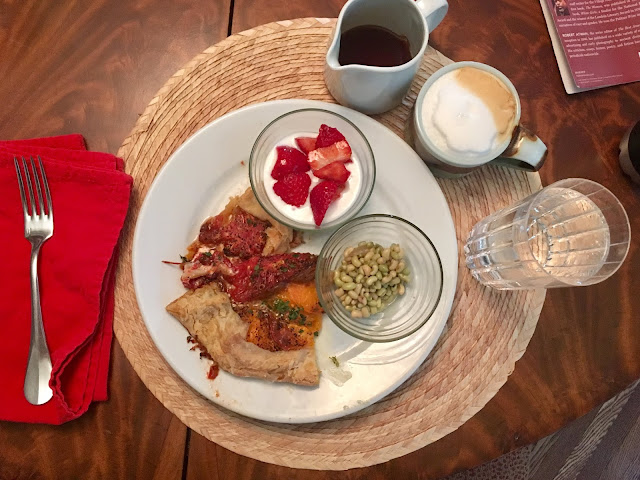 And then the three of us walked down to 12S so I could do a little souvenir shopping. After we returned back to the house, Lisa left for a board meeting and I did some journaling while Jim worked on his iPad (strange choice of device, amirite??).

Then my friend Caroline picked me up! Caroline is a farmer who was also on the Slow Food Middle Tennessee Board with Vivek and me. We tried to go to the Frist to see a Frida Kahlo exhibit, but the line was literally out the door so we decided to walk to the 21C hotel instead, where there is always a free rotating art exhibit in the hallways. A lot of the art in the hotel was super creepy (the theme being "supernatural,") but here is one of the more enjoyable pieces: 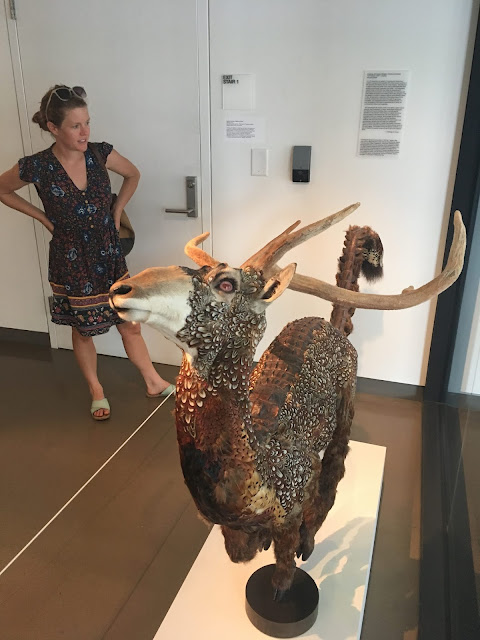 After our loop through the hotel, Caroline drove me to the airport and I was off, back to Chapel Hill.
Posted by Caroline Leland at 7:12 PM No comments: Links to this post

Summer Snapshots; or, The Things I Eat


Posted by Caroline Leland at 4:38 PM No comments: Links to this post

Outside of my day job, I direct a summer internship program in Tarboro called The Eastern NC Internship Program. This summer was our best yet, and I want to share a few photos from throughout the 8-week period when all the interns lived together in Tarboro.


We piloted our program through a partnership with the Robertson Scholars Leadership Program, which has sent us five interns for the past three summers. The following screenshots depict parts of the scholars' Instagram takeover for the Robertson Program's Instagram account. 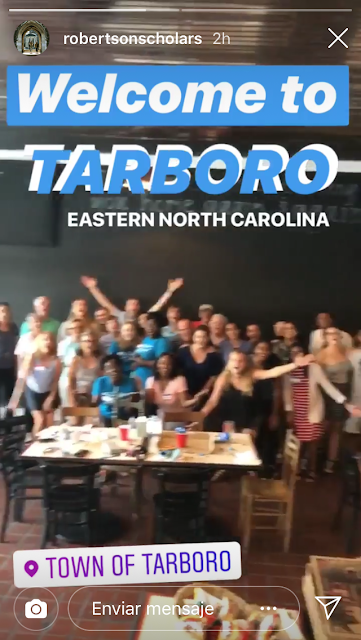 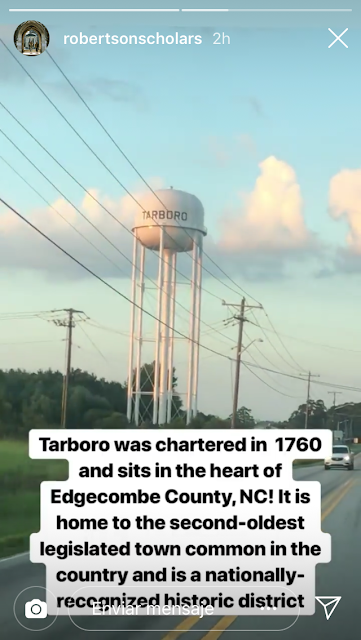 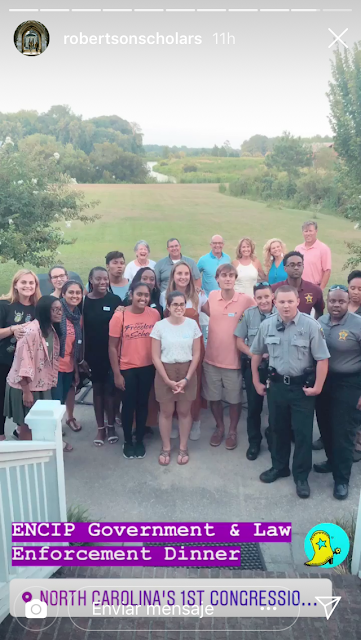 And here is a shot from our end-of-summer celebration, where community members gathered to hear reflections from each intern on what their summer has meant to them. Below, Sophia Ramirez ’22, a Roberton Scholar, speaks about her internship with the Edgecombe County Health Department: 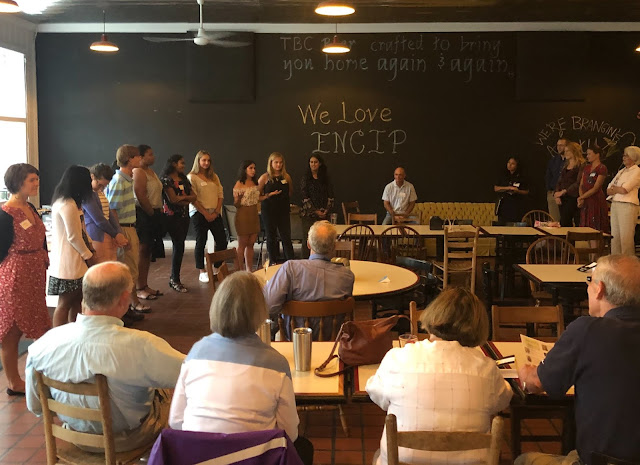 Of course, I have lots more thoughts about this program, but I'll save those reflections for another time!
Posted by Caroline Leland at 4:52 PM No comments: Links to this post