Why does life happen all at once?  My life as a freelancer has extreme ebbs and flows in terms of workload, and this past week and upcoming week are "flow" weeks.

I've been writing executive summaries of nominations to the Tennessee Healthcare Hall of Fame for Belmont University, doing a few a day. I found out towards the end of this week that there will be more than twice as many nominations as expected, but my deadline is the same. Meanwhile, I got scheduled three shifts at Txikito next week. So I'm working through this weekend to get them all done.

But it's a good kind of busy.

That's pretty much all I did this past week, actually: work on Health:Further, TN Healthcare Hall of Fame, and Txikito. Also ENCIP — we're finalizing our internship opportunities for this summer and strategically recruiting student applicants.

Something fun I did this week (which was also sort of work but mostly fun) was showcase the first 8.5 minutes of Episode 2 of my Health:Further podcast series at the NYC Radio Club meetup. I got tons of great feedback that I'm excited to incorporate.

I also had a phone call with a rep from the online video-based learning site Skillshare, which is recruiting me to produce another class on their platform. Excited for that as well.

The only anecdote I have from this week:

On Friday my computer wouldn't turn on. I was getting a weird flashing folder icon with a question mark on it, which seemed extremely ominous. I didn't have time to deal with it Friday morning, as I was headed to Park Slope to meet with my friend Vicki. She's the Associate Director for Summer Programs at the Robertson Program and my key point-person for getting Robertson Scholars to Edgecombe County through ENCIP. She is normally in North Carolina but happens to be visiting Brooklyn this weekend! Along with a couple of other intern mentors in other locations, we're working on a writing project together to share with the academic community our key learnings on a forming and managing a successful campus-community partnership.

After our meeting, I called Apple Support. A nice man named Dan walked me through some troubleshooting options. Finally, he recommended that I visit an Apple Store for in-person diagnostics. The Apple Store closest to me didn't have appointment availability before Wednesday. The next-closest one didn't have availability til Thursday. But the third-closest had an open appointment slot at 1:15pm! So off to W 14th St., Manhattan, I went.

Dan, the support guy on the phone, had implied that my hard drive had probably collapsed. I wasn't panicking because I'd backed up all the most important things, but it would be super annoying if I couldn't work over the weekend. Basically I'd miss big deadlines for all my ongoing projects. At the Apple Store I talked to a nice man named Diego who thought Dan was probably right. But he wanted to check one other thing first. So I left my laptop with him and set out to find a library so I could get some work done even while my laptop was out of commission.

I found this incredibly stunning library a 15-minute walk away. 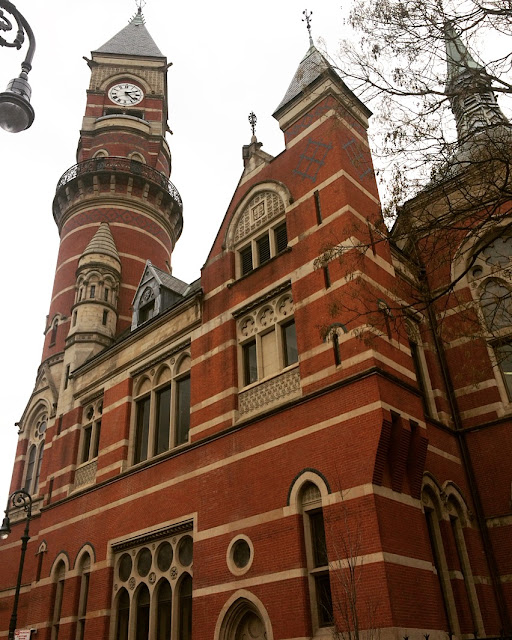 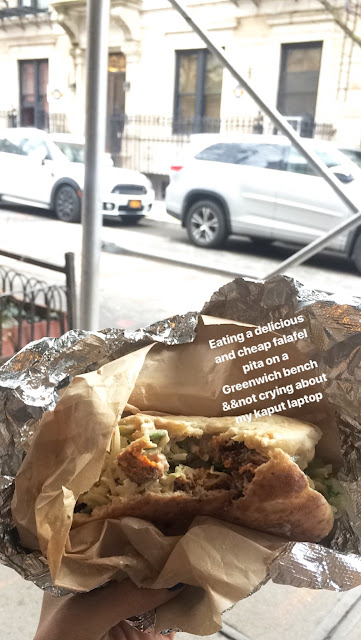 As soon as I got settled in front of the library computer, I got an email from Apple saying my computer was ready for pickup. The suspense was killing me, but then Diego called! And said it was back from the edge of doom! The issue had been the bracket connecting to the hard drive, and they replaced it for free since it was apparently a common flaw.

I was overjoyed.
But then I was suspicious.
Now I am harboring a theory that Apple implants "harmless" flaws in its products to generate consumer panic and then extreme relief and happiness. It's all a conspiracy to remind us to be appreciative of what we have, and to remind us how important it is to back up our data. And to generate even more customer devotion, in this case based on the perceived brilliance of the Apple support team.

Anyway, this is the kind of misadventure that 100% would have made me cry all day long before I started taking antidepressants. Thank the goddesses above for mood-stabilizing drugs, woo!
Posted by Caroline Leland at 11:13 PM