scroll down for cute animal pic

Look who came to visit! 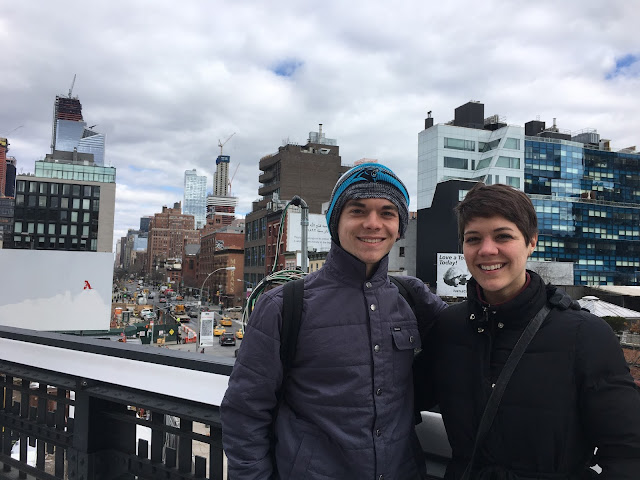 Jack landed a press pass to the ACC tournament at Barclays, so he stayed with me in Brooklyn from Thursday morning through Sunday morning. We only got two half-days to hang out, though, because we were both working a lot — him reporting on the games, and me doing my podcast thing and working at Txikito. But the time we did spend together was really special :)

Fun things we did:

We visited the 9/11 Memorial Museum, which I obviously wouldn't call "fun" but was totally worthwhile. I'd been before, back in the summer of 2014 when Papa and Nana visited me here. It was good to be able to linger on the parts I'd had to rush through before. There is so much information and emotion to absorb while you're there — you either have to take hours or else skip stuff.

This is the only photo I took there:

The parts of the museum that hit me hardest were the goodbye calls from the passengers and flight attendants on the planes before they crashed. The museum has actual recordings from voicemails those people left for their life partners. Seriously heartbreaking.

And the parts about people jumping from the burning towers. It reminds me of that David Foster Wallace quote about suicide:

“The so-called ‘psychotically depressed’ person who tries to kill herself doesn’t do so out of ‘hopelessness’ or any abstract conviction that life’s assets and debits do not square. And surely not because death seems suddenly appealing. The person in whom Its invisible agony reaches a certain unendurable level will kill herself the same way a trapped person will eventually jump from the window of a burning high-rise. Make no mistake about people who leap from burning windows. Their terror of falling from a great height is still just as great as it would be for you or me standing speculatively at the same window just checking out the view; i.e. the fear of falling remains a constant. The variable here is the other terror, the fire’s flames: when the flames get close enough, falling to death becomes the slightly less terrible of two terrors. It’s not desiring the fall; it’s terror of the flames. And yet nobody down on the sidewalk, looking up and yelling ‘Don’t!’ and ‘Hang on!’, can understand the jump. Not really. You’d have to have personally been trapped and felt flames to really understand a terror way beyond falling.”

Which reminds me of my friend Priya, who quoted DFW on her GoFundMe page to raise money to help her parents with her hospital bills. Priya put together the GoFundMe before she killed herself.

"It's said that people who choose to take their own lives are selfish. That they aren't thinking of the ones they're leaving behind. The truth is, I've spent the last six years thinking about what I'd leave behind. More importantly, whom," she wrote.

"But to be honest, I'm tired. I'm tired of fighting. I'm tired of feeling like a prisoner in my own body. Like a spectator of my own life. That's what mental illness does to you. I tried to hold out for as long as I could. But every bad day, every disappointment, every heartbreak, every anxiety attack just reminded me that my time here had an expiration date."

One more association: Florence's song "Falling," which is among my favorites.

Ok, enough of the heavy stuff. That night I went to bed at 6pm in part because the museum was pretty emotionally exhausting. And because I hadn't really paused to catch my breath in a few days.

Now for some comfort from the natural world! At the American Museum of Natural History the next day, I learned about this adorably funky animal:

Posted by Caroline Leland at 2:40 PM