After a 950 mile drive that took about almost 24 hours to complete (stopped in Clemson for dinner and spent the night in Montgomery), this afternoon I finally arrived in New Orleans! My Uncle Jimmy (a New Orleans native and the best tour guide I could ask for) took my dad and me, along with my housemate Katie, to a local lunch place for some of the best po'boys in the city. There were Christmas lights all over the ceiling and lots of random stuff on the walls in this restaurant. Dad called it tacky but it reminded me of my dorm room... oops. But we all agreed it was a fun atmosphere.

After lunch, Jimmy drove us all around in the city, explaining points of interest and throwing out so many recommendations I actually took notes on my phone ("no cover charge at Spotted Cat. order gumbo at Cochon.") I'm so glad to have him as a resource this summer.

I spent a couple of hours moving into my condo, which is in a fantastic location near Magazine Street in the Garden District. I'm sharing a unit with two other girls. There are four more girls living in the unit downstairs and five guys next door to them. Half of us have arrived so far and everyone should be here within the next week or so. I'm expecting it to be a little challenging but a lot of fun for the twelve of us to be living together for the next two months.

Dad, Jimmy, and I ate at one of Jimmy's favorite restaurants for dinner—I tried the homemade turtle soup au sherry—then got beignets and coffee from Cafe du Monde.

This should probably count as Day 0 rather than Day 1 since I've only been here a few hours but I've already eaten a clam-and-shrimp po'boy, taken pictures of the Superdome, been introduced to Sno-balls, walked around the French Quarter, eaten at Cafe du Monde, and seen/learned about so much of the city (albeit through a car window), I feel like today has earned status as Day 1. Here's to 56 more days that are just as full and fun! 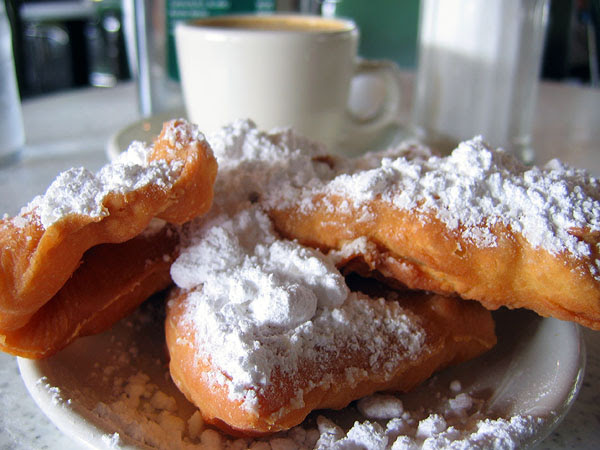 Posted by Caroline at 2:17 AM No comments:

Is it strange that my newest ambition is to be a Braeburn apple? This started when I was brainstorming for a blog title. I remembered an icebreaker game where I chose an apple to represent me because the fruit typically symbolizes school and learning, and also health— a few of the most important values in my life.

Since then, I've realized apple metaphors are much more numerous than that. The tree: deeply rooted and newly sprouting, always reaching and growing. The seeds: giant potential in tiny form, hidden within. The core: healthy and strong, or secretly rotting with a deceptively flawless exterior. Biblical parables about the production of good fruit. An apple a day. One bad apple. The apple of my eye... The apple is our archetypical fruit, and the associations we’ve given it permeate our understanding of the world.

Did you know there are more apple varieties than there are languages? The Braeburn apple, my new favorite, is one of 7,500 varieties in the world! According to orangepippin.com, the Braeburn is easy to grow (can I twist that into easy-going?), very productive, and notably hardy. But what makes it stand out from competition is flavor. Like its coloring, the Braeburn taste is multi-dimensional: deep, rich, and complex. I want the flavor of my life, like the apple I’ve chosen to represent me, to be multi-dimensional. I want such depth and richness to saturate my day-to-day living.

Additionally, the Braeburn is aromatic, precocious, crisp without being hard, and “sharp and refreshing but with a good balance of sweetness.” I can't help but laugh at myself for wanting so much in common with an apple.

According to a website I found, “if you get a good one it really reminds you why you like eating apples.” I want to be that kind of person: someone who reminds you of the value of humanity. Someone that starts a conversation that inspires you, or encourages you, or makes you stop and think. I want to be a person like a Braeburn.

I have to admit my heart sank when I came across a recently written article titled “Braeburn’s Fatal Flaw." The article informed me that the inside of Braeburn apples sometimes turns brown during storage, a disorder that isn’t discovered until the consumer cuts or bites into the fruit much later. I thought about ignoring this unfortunate development. But then I realized that instead of ruining my comparison, this flaw completes it.

Like any person, the Braeburn apple is not perfect. Although it embodies several surprisingly applicable characteristics that I see in my own life, or at least aspire to, it has its own flaws as well. The Braeburn browning disorder in particular seems to have a moral of its own, making me wonder about the core of things. What’s at the core? That’s a question I ask every day, in some form or another. Seeing beyond surface appearances, seeking deeper for the truth of things, searching for the true essence.

Every person has a story. Like an apple, each person has his or her own bruises, though they might be hidden under the skin. Each person has seeds of potential as well as a past more complex and influential than the root system grounding a tree... I loved the plant biology part of AP bio, so I could wax poetic about tree anatomy way longer than anyone would want to read. But for now I need to end this post.

So that's the explanation for my blog title. I might throw in more metaphors in the future, but I promise I won’t be too heavy-handed with this apple thing. I see it as a way to give my blog a theme and possibly some inspiration on days when life seems dull. And depending on my mood and creativity level, I might occasionally go punny with apple jokes—but that might not appeel to everyone.