Gaby and I spent three nights in Florence at the apartment of my friend Graham, a UNC student who is studying there this semester. Two of his roommates were out of town for the weekend, so we even got our own beds!

The afternoon we arrived, we spent a couple of hours hanging out with Graham and his roommates in the apartment before heading out to visit a museum, see the Duomo, eat gelato, and climb a hillside park to watch the sunset. Graham, who has taught himself how to cook while in Italy, made us a delicious Italian meal — chicken parmesan for the meat-eaters and a bready tomato soup for the vegetarians.


The next day, Gaby and I knocked out an impressively full day of sightseeing and museum-visiting. From Florence's Duomo to Michelangelo's David, we saw more than I would have thought possible in one day. 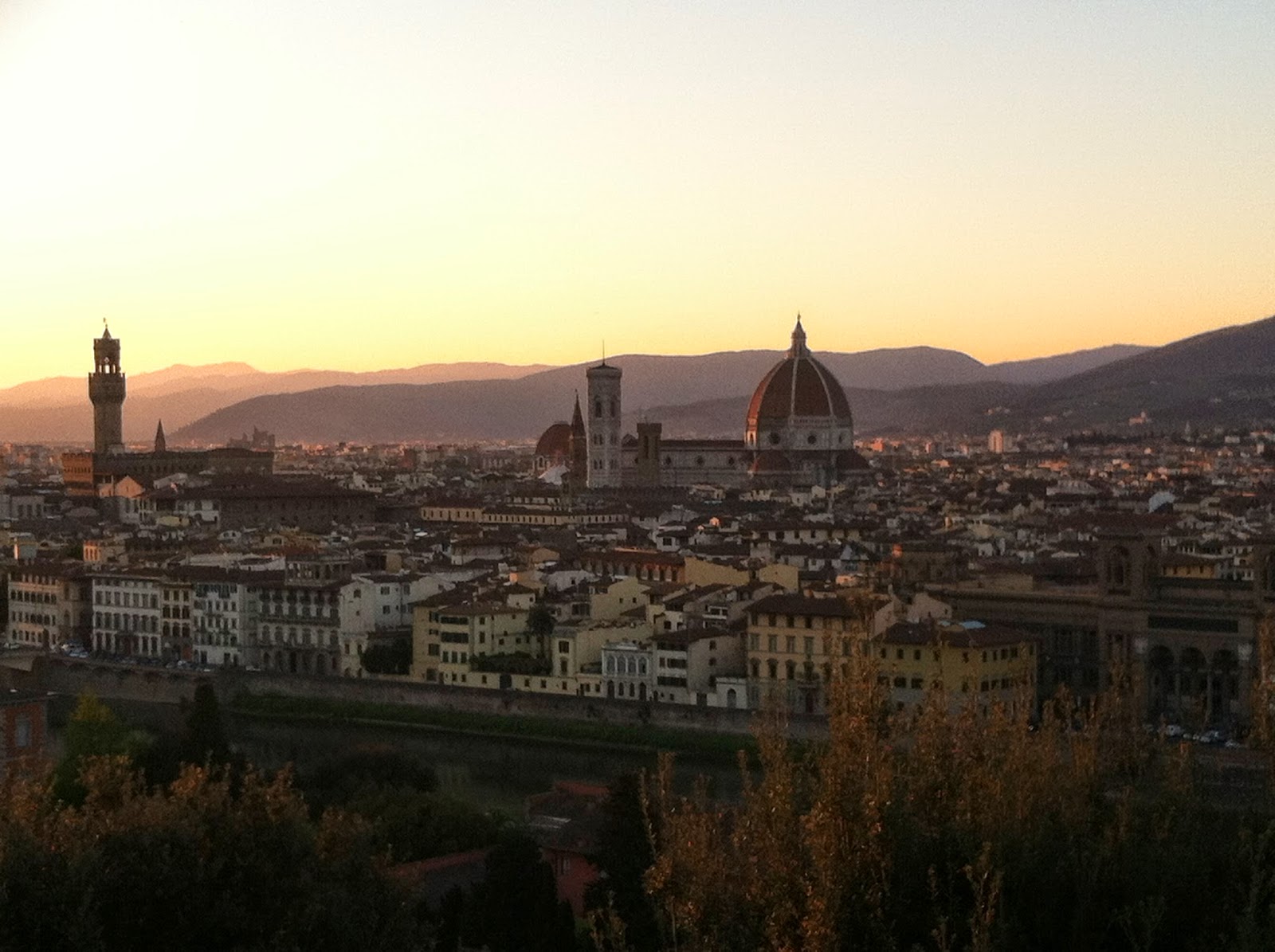 Saturday was rainy and colder, so we stayed in most of the day instead of visiting Cinque Terre as originally planned. I worked on summer plans, Gaby played 2048, and along with Graham's roommate Jorge we both watched at least an hour of trailers for old Disney Channel movies.

Overall thoughts on Florence: It's a charming little town, like Pamplona with better weather, better food, actual tourist attractions and a prettier river. If I weren't so obsessed with learning Spanish I'd definitely be having regrets that I hadn't studied there instead. Getting to hang out with Graham and his friends was another highlight of the visit! Having such a limited social circle in Pamplona has gotten old quickly, so it was nice to make new friends — especially with other UNC students who I could connect with easily. I'm looking forward to seeing them back in Chapel Hill!

Posted by Caroline Leland at 4:25 PM No comments:

Thursday morning, Gaby and I took a bus from Milan to Florence.

That sentence is so deceptively simple.

We got up at 7 and left Violetta's apartment at 7:50 for an 8:30 bus. We took a city bus to a subway station, then took a subway to the main bus station. We arrived at the bus station at 8:15. After wandering around for five minutes searching for our bus, we went to the information office to ask. Of course, no one there spoke English. The man behind the window pointed across the street and said, "Red building!" So we speed-walked across the station, across the street, and along the sidewalk towards the brick building. No buses. We walked all the way around the building. When I realized the sidewalk had ended and we were walking in the street, I called Gaby back. "This can't be right."

So we jogged, worry increasing, back to the information booth for more unsuccessful communication attempts. By now it was 8:27. Finally a kind woman standing nearby took pity on us and explained that the bus was late and would arrive at a spot across the street which Gaby and I had run past minutes earlier in our rush to the red building.

So we speed-walked back across the station and across the street. A few inquiries among the people gathered on the sidewalk revealed that everyone standing there (all who had seen us running back and forth, of course) was waiting for our bus. We waited for 20 more minutes, then followed the crowd back across the street to a different spot where the bus actually arrived.

Thirty minutes late, we finally left Milan. My stomach sank when I looked at my ticket and realized we were supposed to transfer buses in Bologna in a 20-minute time window which we certainly were not going to make. The bus driver didn't speak English, so Gaby and I waited somewhat apprehensively to see what would happen next.

When we arrived in Bologna, half an hour late, we speed-walked up and down the row of buses, looking for one that said it was going to Firenze (Florence). No luck. So we jogged back to our original bus to try asking again. After a lot of difficult communication with people who didn't seem interested in helping, we finally found a bus (our bus? I'll never know) to Florence.

Florence-ish, I should say. After riding for a couple of hours, the bus abruptly pulled over and some people began to climb out. "Firenze?" I asked a woman who was getting off. "Si," she replied. So I woke up Gaby and we grabbed our stuff and climbed out. As the bus pulled away, I looked around and realized we were standing on the grassy shoulder of a highway, with thick undergrowth on one side and cars whizzing by on the other. No buildings to be seen.

Gaby and I turned to each other. "Where the hell are we?"

The handful of people who had gotten off the bus were all walking in the same direction, so we followed. The group gathered at a bus stop about five minutes down the road, and we climbed onto a bus with the rest of them, hoping for the best. Luckily, Gaby has a data plan on her iPhone, so we pulled up Google maps and found out that we were about six kilometers outside of Florence.

A 20-minute bus ride later, we got off next to the river in Florence. Grabbed lunch from a tiny, adorable panini shop recommended by my Lonely Planet guidebook, then walked to my friend Graham's apartment.
Posted by Caroline Leland at 3:26 PM No comments:

How do I even begin to write about a ten-day vacation in Italy? As always when traveling, we encountered a few stressful moments, inconveniences and discomfort, but overall things fell into place wonderfully.


I left Pamplona at 8:30 p.m. on Tuesday night (just 48 hours after arriving home from Paris). My friend Gaby and I took a bus to Barcelona for our 6 a.m. flight. Because Brooke's family was visiting that week, she flew to Italy to meet up with us a few days later.

We arrived in Milan around 8 a.m. on Wednesday. Grabbed a bus from the airport into town, found a subway to the Duomo, and then wandered around the area for a couple of hours while we waited for our friend Violetta, who is from Milan.

While we waited, I took Gaby to Luini's, a tiny pastry shop that Massi had showed me back in March. We each had a luini (fried or baked savory turnover stuffed with classic Italian combinations like mozzarella, tomato and basil). Then we waited at a sidewalk table at a classy-looking cafe/restaurant, where I had a classic (and delicious) Italian cannolo and expresso.

With Violetta, we climbed the Duomo (something I hadn't done with Massi — and totally worth it for the views). Then we walked to the other landmarks I had visited with Massi. We ended up taking naps in the sun in Milan's huge central park— quite a pleasant afternoon.


Violetta and her roommate took us out to Milan's popular canal-side restaurant area for dinner. We had what Italians call apertivo, which is a €9 or €10 deal of a drink plus an unlimited buffet of heavy hors d'oeuvre. Later we walked to a plaza where dozens of people our age were gathered in small circles, drinking and smoking and talking. Gaby and I loved the vibe, but we were both exhausted from our overnight travels so we bowed out early.


Posted by Caroline Leland at 2:17 PM No comments:

Living in tiny, out-of-the-way Pamplona, I sometimes think of myself as pretty hipster. All the UNC kids who do the Seville program are so mainstream, you know? Well I decided I wasn't too hipster to visit the most visited city in the world. I had to miss a group presentation in order to go, but if I fail a class in exchange for visiting Paris I think that's a pretty fair trade.


I stayed three nights at the apartment of a friend named Nicolas whom I met while traveling in Argentina. He lives just outside of Paris but right on a main train line, and he was an incredible host throughout my entire time there. I felt so lucky to be shown around Paris by someone who has lived there all his life!

Unfortunately French words simply don't stick in my brain, so I've forgotten the names of a lot of the things we saw and places we visited. The names of the places I do remember you'll recognize anyway. 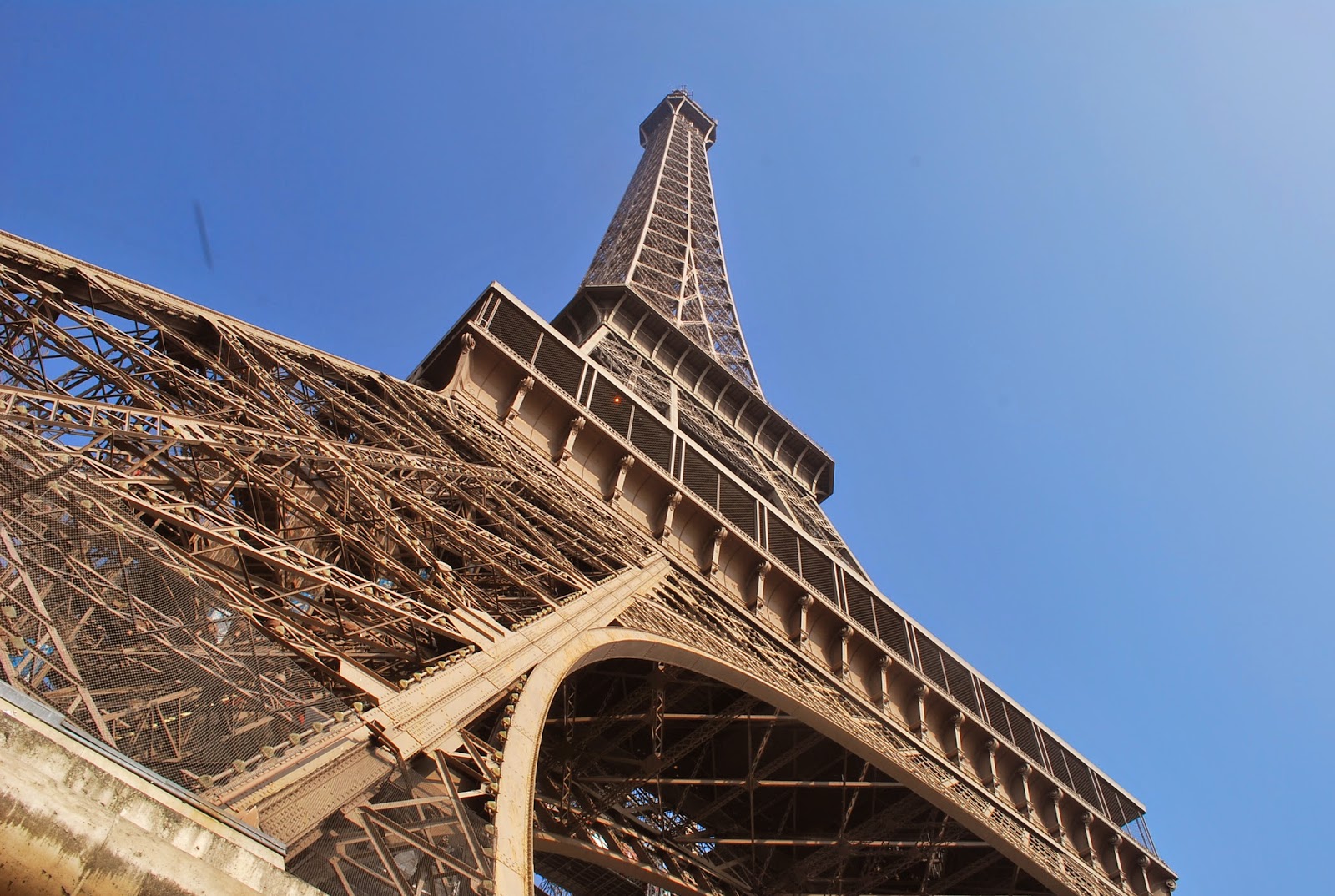 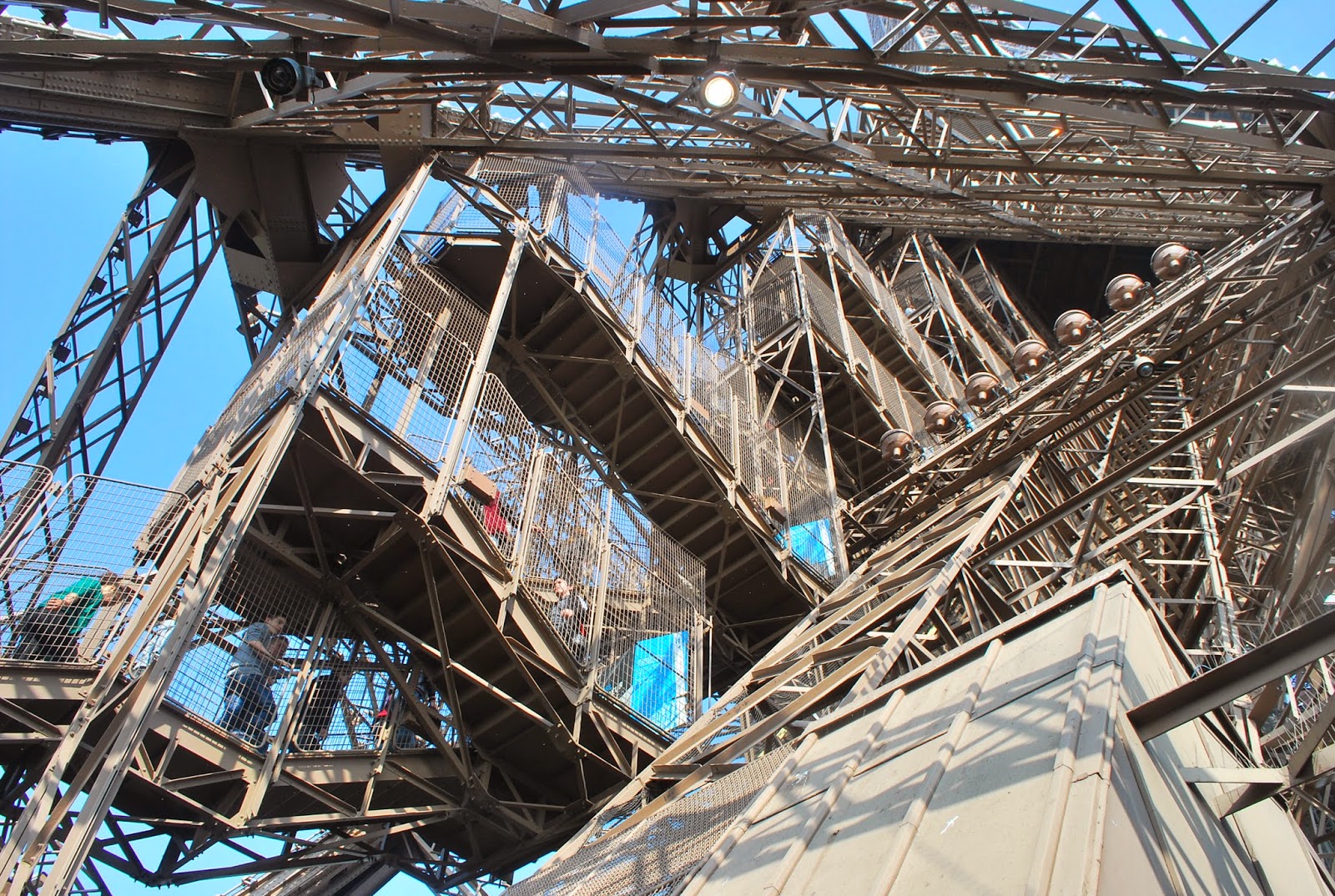 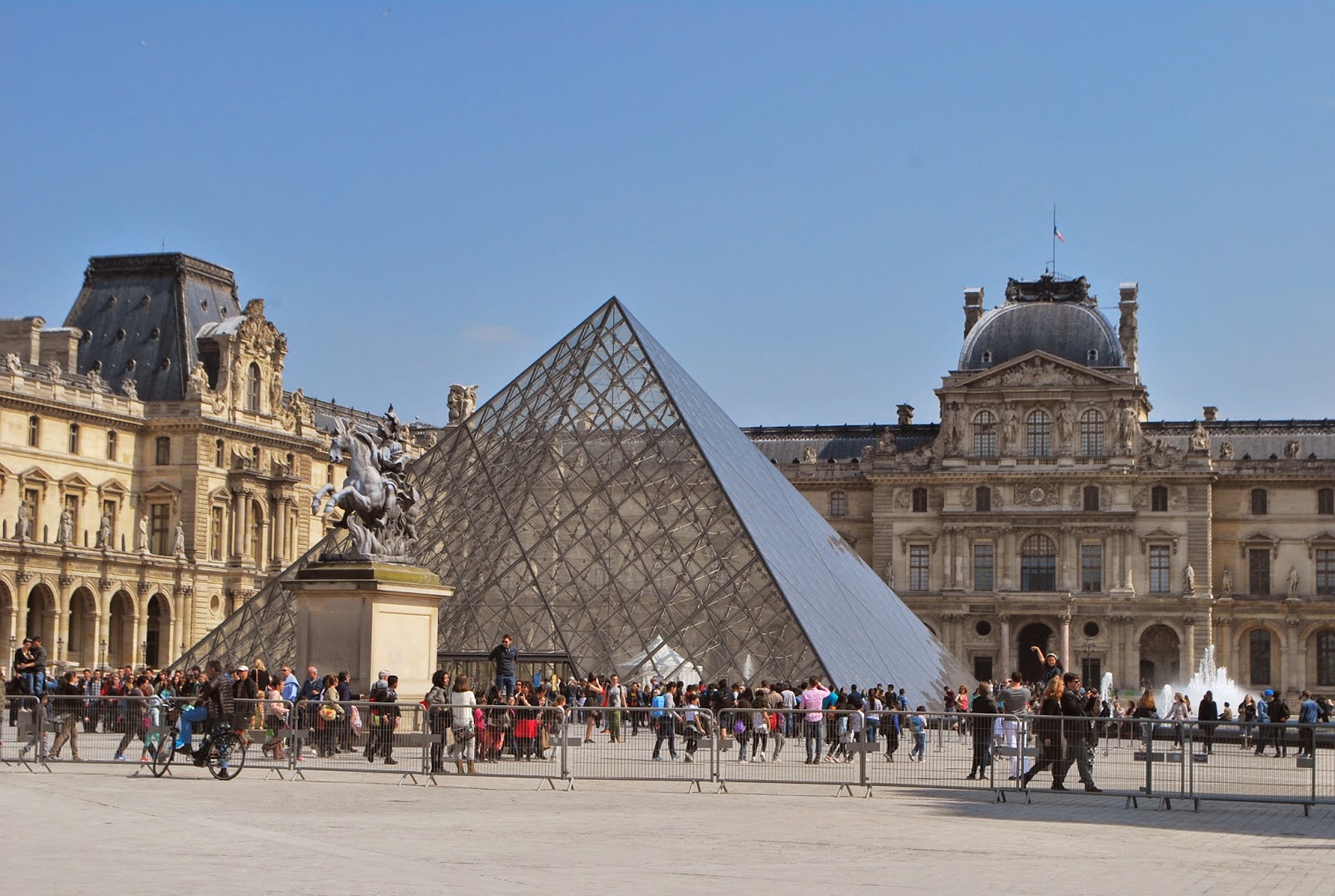 3. Ride bikes along the Seine 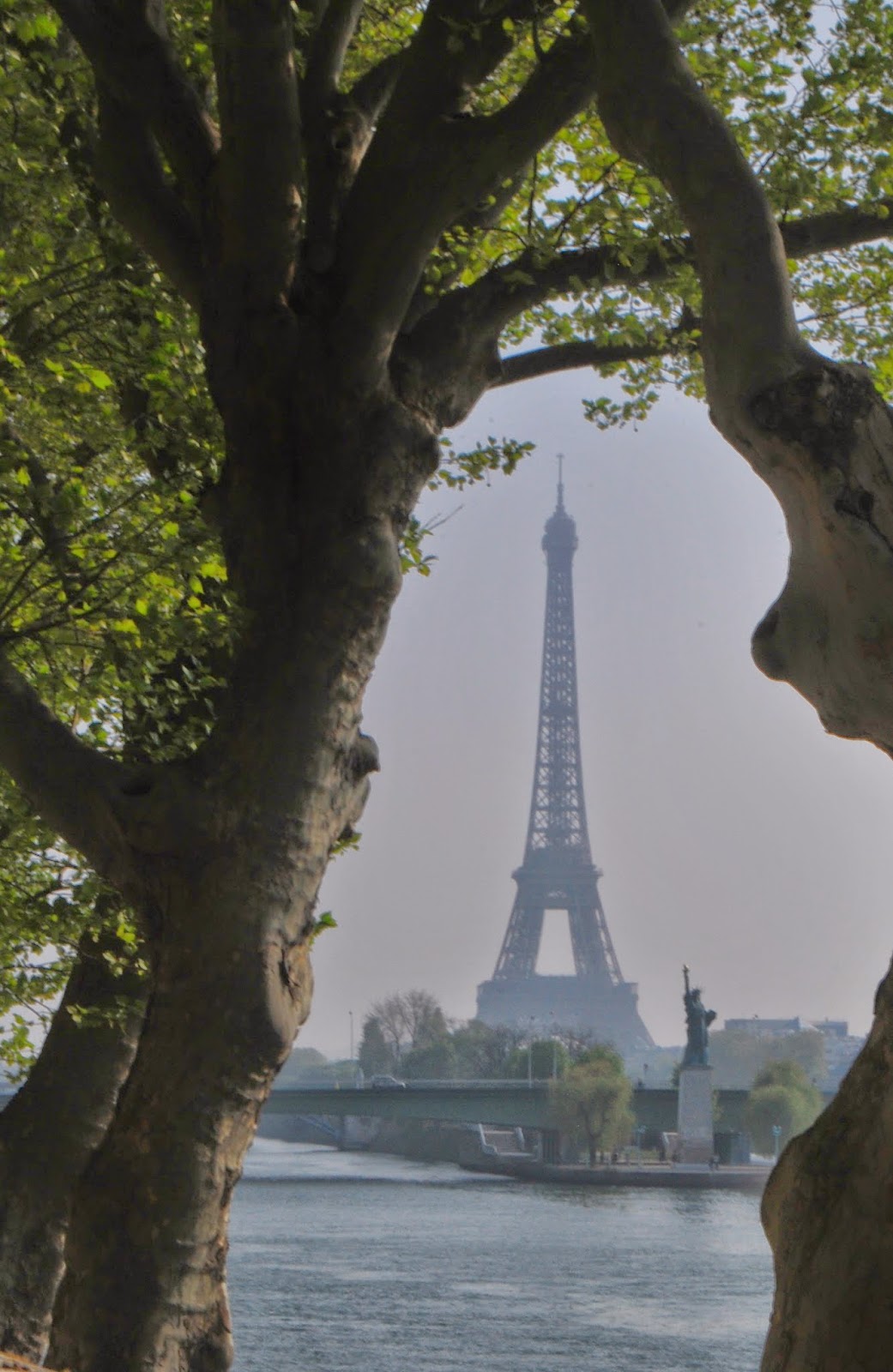 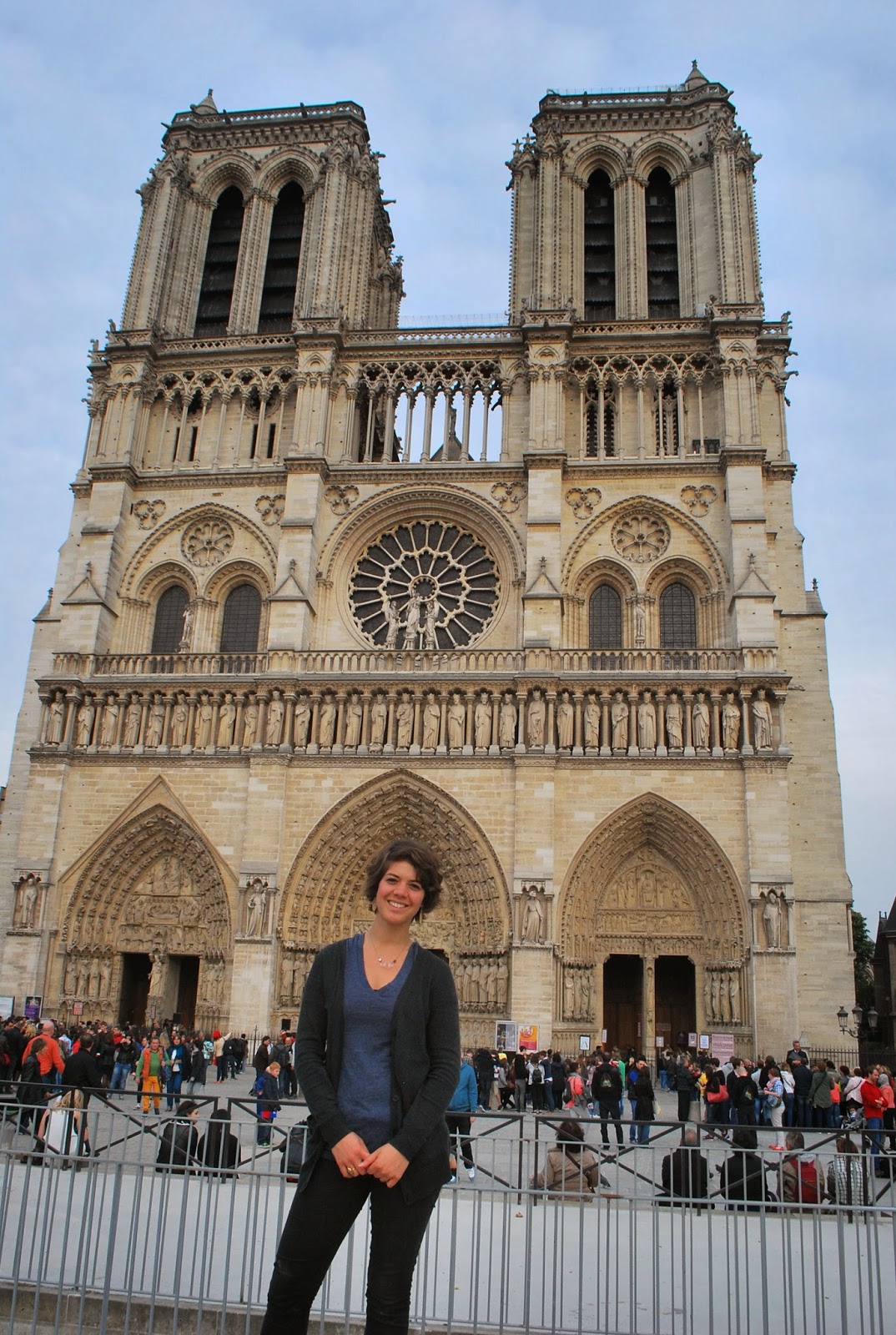 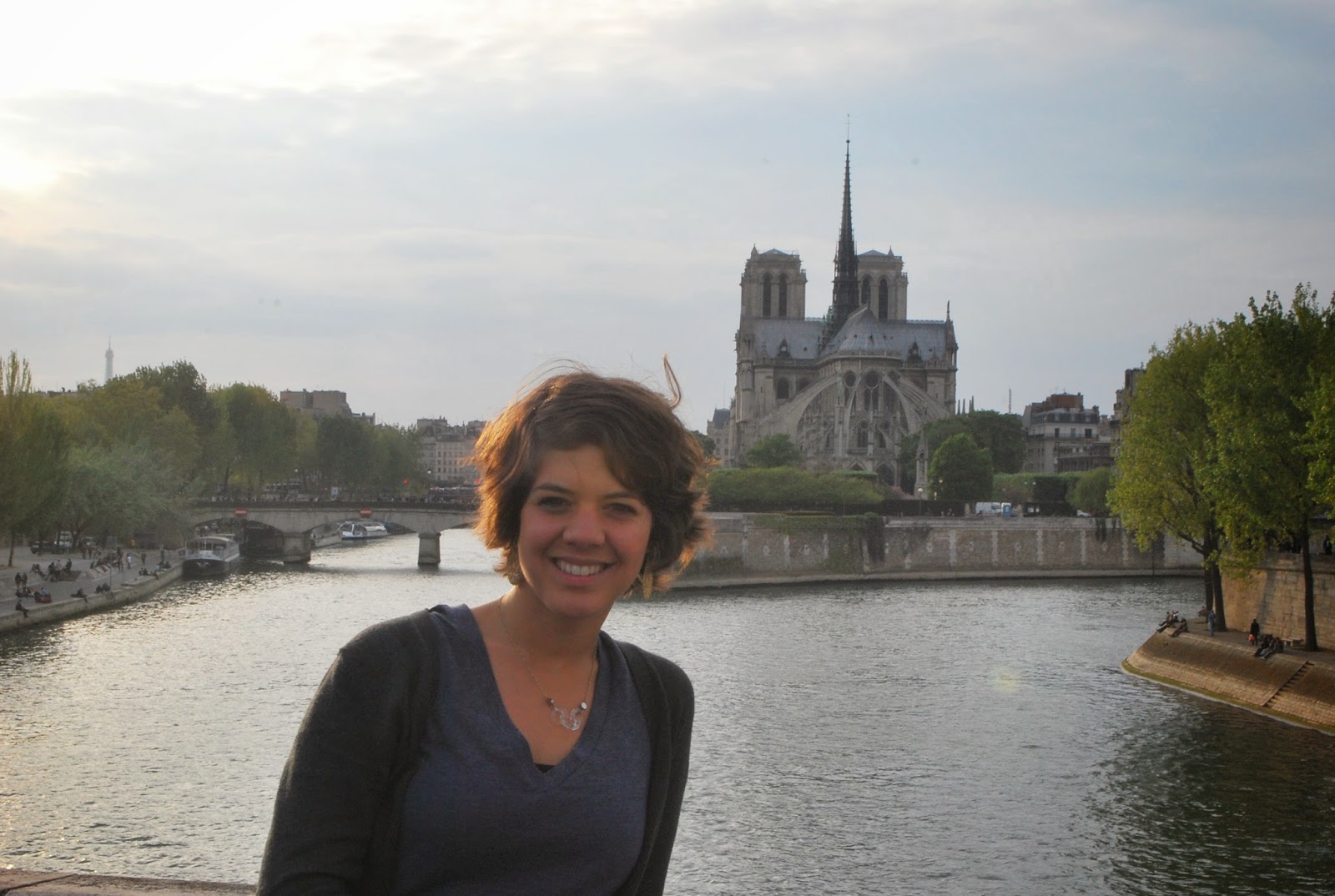 I also: (4) ate a croissant, (5) ate a baguette, (6) ate some crepes and (7) drank some Champagne.
Other beautiful sights from the weekend: 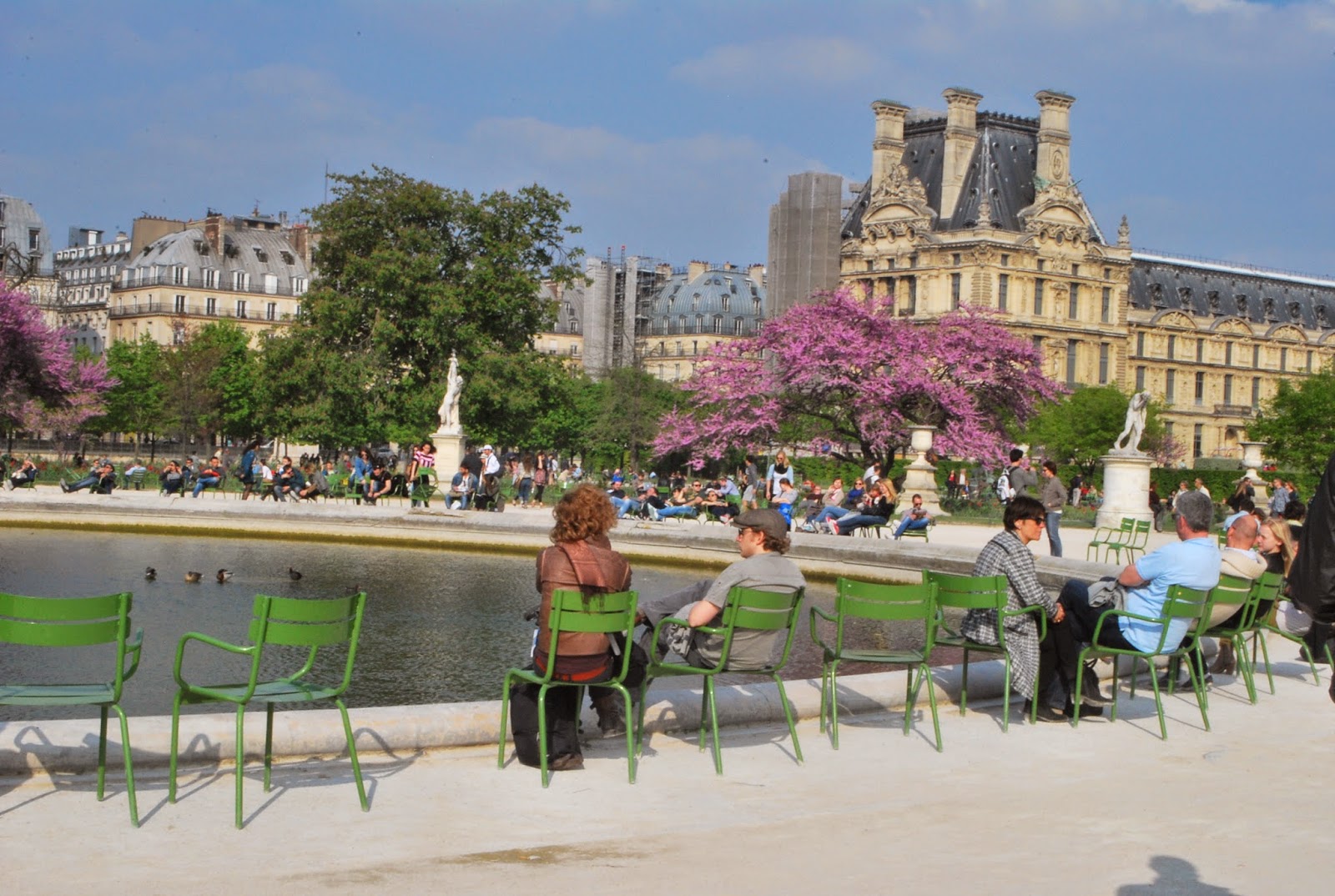 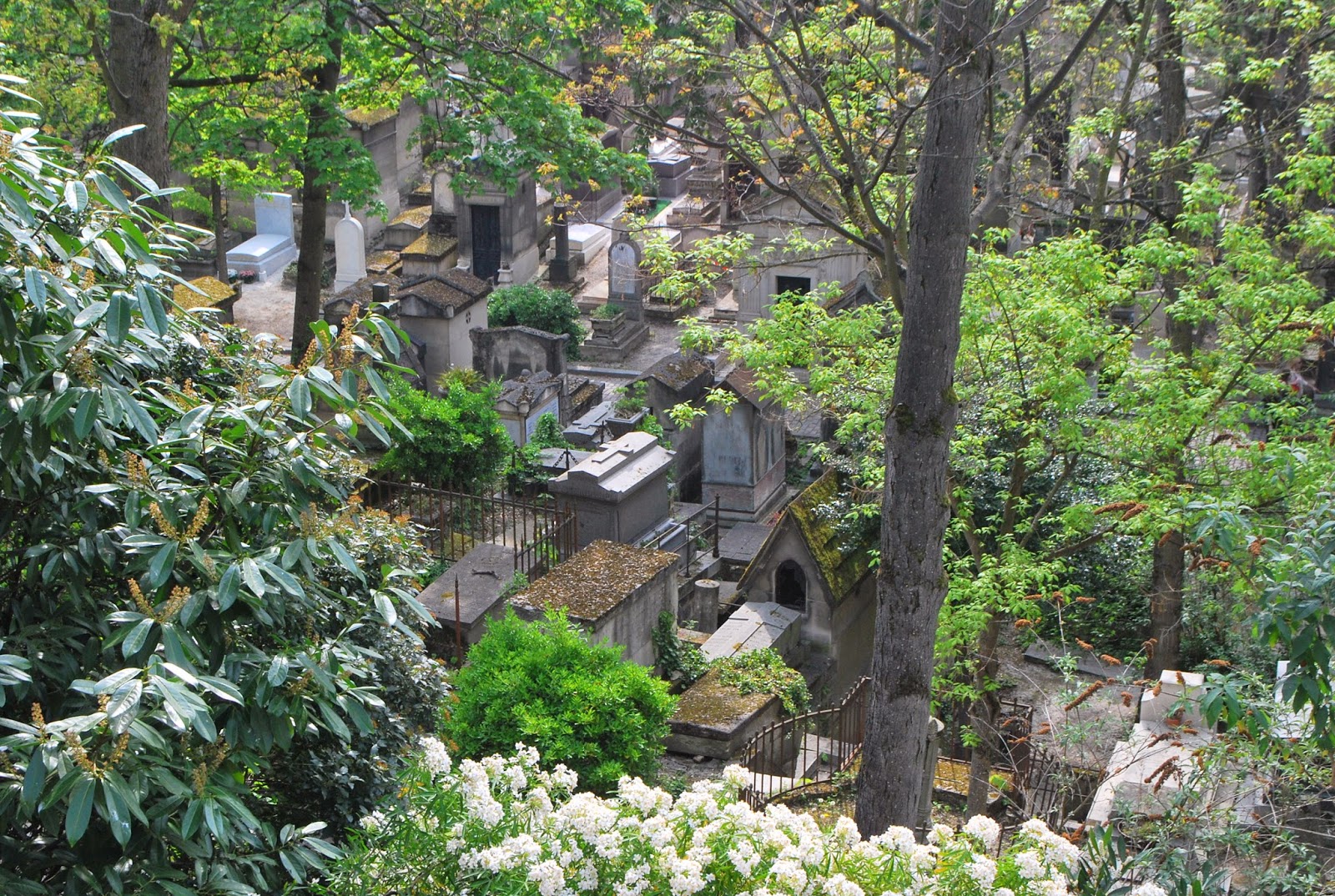