Week 5: In Which I Stop Counting Weeks

I feel like I should stop counting weeks. It's funny to me that I used to have eight-week internships in a place, and that felt like a sufficient amount of time to get to know said place. I was ready to leave Buenos Aires after just seven weeks. And now, what I'd give to have that time back, to extend it for another two or three weeks instead of cutting it short.

Anyway, I've now been in NYC for five weeks, and I'm going to stop counting because it's not five out of seven or eight or even 10: It's five out of indefinite. That's terrifying and exciting. I caught up on the phone with a few friends today, and I told them all how wonderful it is to do something you've wanted to do for a long time, even if that thing isn't necessarily logical or well-planned. My plan is to earn more money than I spend, to prioritize friendships with people I admire, and to appreciate this incredible city every day that I'm in it.

That's not much of a plan, but it's enough to keep me moving forward for now.


This week I started to feel like I'm finding a routine. I worked at Txikito Wednesday and Thursday, and I'm working again this upcoming Wednesday and Thursday. Every morning from 9am to noon I work on my Health:Further podcast project. After eating lunch, I complete one or two Tennessee Healthcare Hall of Fame nomination summaries (my latest writing contract). Then I work out, then I either make dinner or head into the city for work at the restaurant. It's a good routine.


On Monday night, I attended a Slow Food event called The Almanac, where a panel of food policy leaders and activists discussed "Food Activism in an Altered Landscape." The guy who founded the New York Greenmarket was there, and a woman who co-founded Brooklyn Grange rooftop farm, a woman who advocates for young farmers, and several other similarly inspiring individuals. My friend Zaki came and brought his girlfriend. They're both financial analysts and said they learned a lot, which I was really happy about. All three of us stayed late to talk to the panelists afterwards. 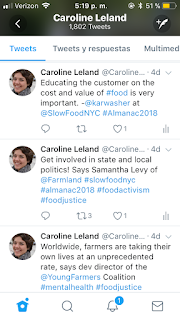 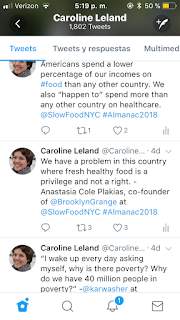 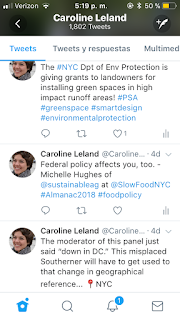 On Tuesday, my evening activity was making vegan brownies. They turned out amazingly good, and I have been eating them every day since. Apparently my three roommates have much more self-control than I, because they're not disappearing nearly as fast as I would have imagined. I took half to the restaurant and earned some brownie points with the staff. Pun not intended, but amazingly appropriate! Could this be the origin of the phrase??

At work on Thursday I used an espresso machine for the first time! I love gaining new skills, even simple or extraneous ones.

On Friday evening I met another wonderful new person, a woman named Sierra with whom I'll be co-hosting the newest Brooklyn Dinner Party table. We bonded over our shared experience of having a dead mom. My life is weird.

That night I came home, made dinner, drank several glasses of my organic red blend, and applied to write for the NYT. I'll publish my application essay as a separate blog post.


I've spent all day today applying to my dream job at Duke. Which is annoying because I just got to NYC and want to stay here indefinitely, but turns out you sometimes have to make sacrifices for your dream job. Plus also, I am fully aware that the chances of me landing said dream job are slim, and my NYC residence isn't really all that threatened by this application. Still. Annoying timing.

Posted by Caroline Leland at 5:35 PM